This TRIAD is comprised of the digestive tract, immune system, and the central nervous system.  Together, these intelligent body systems make moment-to-moment decisions in regards to absorption and assimilation, and setting critical boundaries physically, immunologically, and psychically.

When TRIAD 2 is normal, the person feels organized and secure within themselves and their environment. When these systems are out of balance, the person can become jumbled and unpredictable.

Learn More About Each TRIAD 2 System

The gastrointestinal tract (digestive tract or GUT) consists of a hollow muscular tube starting from the oral cavity, where food  enters the mouth, continuing through the pharynx, esophagus,  stomach and intestines to the rectum and anus, where food is  expelled. The gut is involved in the breakdown and resorption of food  nutrients. The gut is also the largest organ of the immune  system. We focus on the intestines and the stomach with the effects of  imbalances in these organs.

Damage to the gut lining can lead to a host of health  problems. There is a complex balance that exists  between the probiotic flora and the immune system,  the gut and liver. Any disruption in your normal gut  function, through environmental stressors (such as  heavy metals and chemical preservatives), poor dietary  habits (such as diets high in carbohydrates, refined  sugars, and high fructose corn syrup), food allergies,  drug therapies (including NSAIDs, steroids, antibiotics),  and chronic stress result in the loss of the  counter-inflammatory flora balance and can easily lead  to uncontrolled inflammation.

Food and bacterial proteins can act together to  damage the gut and allow toxic protein complexes and  other substances to get through the tight junction  glycoprotein and toll receptor network that is normally  supposed to be resistant to such a breach. These  factors in the development of gut dysbiosis, by  promoting the proliferation of Candida albicans (yeast). The gastrointestinal tract (digestive tract or GUT) consists of a hollow muscular tube starting from the oral cavity, where food  enters the mouth, continuing through the pharynx, esophagus,  stomach and intestines to the rectum and anus, where food is  expelled.

There are various accessory organs that assist the tract by  secreting enzymes to help break down food into its component  nutrients. Thus the salivary glands, liver, pancreas and gall bladder have important functions in the digestive system. Food is propelled along the length of the gastrointestinal tract by  peristaltic movements of the muscular walls.

The GUT contains intestinal bacteria (called microflora  or probiotic flora), which serve to preserve gut integrity, help  metabolize foods and drugs, and prevent the overgrowth of  potentially harmful bacteria and fungus (yeast) in the gut. More  than 400 separate bacterial species have been identified as part  of the normal gut flora, including Lactobacillus acidophilus,  Bifidobacterium sp., and others. Potentially harmful  microorganisms are also kept at bay by an extensive immune  system comprising the gut associated lymphoid tissue (GALT).  GALT plays a role in a healthy immune system. In addition to the  lymphoid tissues that make up the GALT, a number of other cell  populations contribute to normal gut defenses.

Cells that line the intestines, called epithelial cells, provide a  physical barrier to bacterial entry, through their tight junctions,  toll proteins and production of mucus, and produce an array of cytokines that can modulate immune responsiveness. The immune system contains specialized organs and cells that are designed to defend the body against foreign invaders, including  microorganisms like bacteria, viruses, fungi, parasites, cancerous  cells and even transplanted tissues.

WHAT IMPACTS YOUR IMMUNE SYSTEM

Stress levels can affect your immune system greatly.  Excess cortisol release may lower your immunity, and  studies report those with high stress levels are  reported to have a much higher incidence of upper  respiratory infections as compared to those with low  stress levels.

Your sleep quality and amounts can also affect your  immune system. Less than 7 hours of sleep a night is  reported to almost triple the number of colds you can get when compared to sleeping 8 hours a night.  67% of Americans experience frequent problems  sleeping.

What you eat and are exposed to in the  environment can also affect your immunity. Foods  high in refined carbohydrates (sugars, “white”  breads/rice, high fructose corn syrup), chemical  additives like sweeteners, preservatives, flavoring  (MSG, smoking) and coloring (dyes) can lead to  imbalances in the immune system. Exposure to  heavy metals – lead, cadmium, mercury, arsenic –  can also lead to immune imbalances. Other  environmental contaminants linked to immune  imbalances include cigarette smoking, pesticides,  phthalates (found in cosmetics, self-care products)  and bisphenol A (BPA, found in the lining of cans  and plastics).

Exercise in moderation can help improve immune  function. However, over-training can lead to immune  imbalances, which are common in strenuous  athletics like triathlons and competitions.

Conditions that are tied to chronic inflammation can also imbalance your immune system, these include:

The immune system consists  of the innate immunity and adaptive immunity. These components  are manufactured in various places in the body, including the  lymph nodes, bone, spleen, thymus, tonsils, appendix and Peyer’s  patches in the small intestine.

FUNCTION:
The immune system reaction to invaders and attackers is a  regimented process, consisting of recognition, activation and  mobilization, response and resolution. The immune system is able  to determine, in most instances, what is “self” and what is foreign.  However, in autoimmune conditions like rheumatoid arthritis and  lupus, the immune system begins to attack it’s host – YOU.

The innate immune system, the dominant part of our immunity,  attacks foreign invaders immediately without having encountered  them before but does not give long-lasting immunity against the  attacker. Innate immunity performs several functions: it leads to  inflammation and allergic reactions, helps form a barrier against  attack, such as in the gastrointestinal tract, uses white blood cells  that ingest invaders, and T and B cells and natural killer cells (NK  cells), which help destroy cells and tissues in the body that have  gone “awry”. The B cells (B lymphocytes) can recognize invaders  directly, while the T cells (T lymphocytes) need help from other  cells of the immune system called antigen-presenting cells. The white blood cells are made in primary lymphoid  organs, including:

Other cells in the innate immunity include dendritic cells  that reside in the skin, lymph nodes, and other tissues in the body. They help break the attacker apart so T  cells can recognize it. Also, the complement system  is part of innate immunity. This system uses more  than 30 proteins that act in sequence to destroy the  invader in your body.

The adaptive or acquired immune system uses  antibodies that remember the attackers and is ready  to defeat the invader at any time. This is not present  and birth and must be learned as you are exposed to  various invaders in your body. Cells important in the  adaptive immune system are the lymphocytes – the  B and T cells. T cells are made in the thymus and B  cells in bone marrow.

Antibodies (or immunoglobulins) are also part of the  adaptive immune system. Antibodies are large  glycoprotein molecules that are released by specific  B cells when they encounter a foreign invader  (antigen). Antibodies help our immunity by:

Antibodies found in humans include:

The brain is the “command and control” center of the nervous  system in the body. The brain contains the primary sensory organs  of vision, hearing, balance, taste and smell. The brain controls  cognition and memory, mood and emotions and is the central  control center for all body processes.

The brain’s function is intimately tied to the immune  system and your gastrointestinal tract. Imbalances in
metabolism can lead to imbalances in neurochemistry and brain problems.

Imbalances can be caused by: The brain is located in the cranium, or head. The brain consists of:
Cerebellum
located at the back of the brain; fine tunes movement, balance;  rapid and repetitive actions, i.e. video gaming
Cerebrum
major part of brain; divided into right and left hemispheres and  wrinkled in appearance; speech, memory, learning/intellect,  cognition, movement, personality
Brainstem
lower extension of the brain; connected to the spinal cord;  consists of medulla oblongata, pons and the midbrain; serves as  a relay station by handling messages between different body  parts and the brain; primitive and survival functions (fight/flight,  breathing, blood pressure, heart beat) are located here; sleep     patterns, taste, sight, hearing and balance coordination
Hypothalamus
small structure inside the brain that delivers messages to the  pituitary gland, which releases hormones; plays role in eating,  sexual behavior, sleep, body temperature, emotions, and  movement.
The brain is the most complex organ in the body, with the cerebral  cortex containing about 15-33 billion neurons, or nerve cells, each  connected to other nerve cells.

The brain consists of 2 types of cells – neurons and glial cells.  Both these cells require a supply of blood that delivers glucose  and oxygen to produce ATP or energy. Glial (meaning “glue”) cells provide protection and  support for neurons, helping hold them in place,  provide oxygen and nutrients to the neurons, insulate  the neurons from one another and helping remove  potential pathogens (substances that can produce  disease) and dead neurons.

Glial cells are divided into 3 types: astrocytes,  oligodendrocytes and microglial cells. Astrocytes help  maintain an environment appropriate for the neuronal  signaling via neurochemicals. Oligodendrocytes  help create myelin, a lipid-rich sheath that surrounds  the neuron and allows better conductivity – an  insulation of sorts.

Microglial cells are part of the  immune system and help remove cellular debris and  other results of processes of damage in the brain.

Microglia can release chemicals that lead to  inflammation in the brain, which can be damaging  to the brain if the inflammation is chronic.
The neurons are cells that are excited and  activated by electricity. Neurons send signals to  various parts of the body, sometimes over long  distances, by fibers called axons. These signals are  in the form of electrical impulses called action  potentials, which lasts less than a thousandth of a  second and travels at speeds along the axons of  1-1000 meters per second (over 6/10 of a mile). An  action potential is initiated when a chemical  messenger attaches itself to a receptor, setting up  an electrical charge to be generated through the  neuron.

The process repeats over and over, leading to a  change in your body’s behavior. How the Metabolic Code® Works

Take our signature comprehensive lab panel and lifestyle questionnaire to identify where your systems are currently out of balance.

Based on your results take pharmaceutical grade and clinically tested supplements that are compounded specifically to address each TRIAD.

Based on your profile you will get a detailed Metabolic Code Diet program that will significantly benefit your results and help you reach a healthy weight. 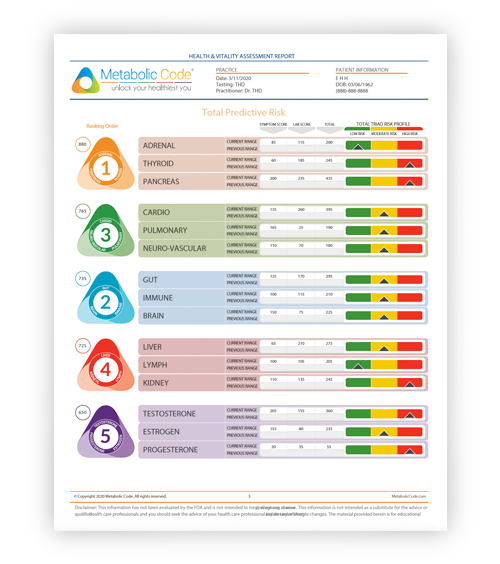 Download a sample Metabolic Code® Report Here to see how you too can transform your lifestyle.

Metabolic Code® is a personalized health evaluation program that creates a precise plan of action for people to live and feel better.

Metabolic Code for you

Experience what so many others have done to rapidly improve their health and vitality long-term. We have lifestyle programs created for people with all types of goals and dietary needs.